Would you like to switch to the accessible version of this site?

Don't need the accessible version of this site?

A Worldly Cat Indeed - Roumi, the Cat with Nine Lives

Many pets have a pedigree but few have a real provenance or history of owner ship as in a valued object or work of art. 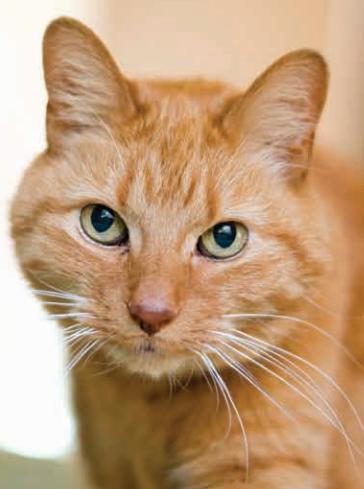 Then, there is ROUMI, a domestic short haired red/orange tabby cat. ROUMI was adopted by his current owners from Frederic Pissarro, the great, great grandson of the French Impressionist painter, Camille
Pissarro – and he has the papers to prove it! Why, even ROUMI’s unique name is thanks to Frederic. It is a contraction of ROU from the French rouge for red and mi for MOI, me in French. Tres bon! And, how many cats can say that they have been flown back and forth to Paris enough times to have frequent flyer miles if they awarded them to felines?

What makes ROUMI so special, also, is that this cat truly has had the proverbial nine lives – or, at least, many of them. When he was just a few years old, he was either hit by a car or kicked by a horse and suffered a severe leg injury. Missing for almost a week, all hope was lost. However, he managed to crawl back to his owner’s home and get the much needed medical assistance to get well.

Then, last summer, after a debilitating few months of weight loss, a savvy vet determined that ROUMI was actually allergic to his thyroid medicine. What to do? The only other course of action was to have a radioactive treatment, which was quite costly and might or might not have worked. After this procedure (which was performed at the Veterinary Teaching Hospital at Colorado State University in Fort Collins,
Colorado) ROUMI came home, locally and then had to be quarantined until his radioactivity was all gone. Thankfully, all worked out well. Within a few weeks, ROUMI was gaining back his weight and on his way to being a normal cat, once more.

ROUMI is a premier mouser – when those little critters have the misfortune of coming into the house. He is playful and lively, especially for a cat who is 15 years old. He loves to throw objects off a table or dresser – to the consternation of his owners. Although not exactly a lap cat, ROUMI does like to sit next to the laptop and provide the inspiration needed for e-mails. And, occasionally, he will put his paw on your arm to be petted when you are trying to read the newspaper or watch TV. How can you resist?

Yes, ROUMI is a special cat – and he knows it. Talk about catitude! He is loaded with it, from whiskers to tail.
Our Hours

Read What Our Clients Say